As telecom operators move toward NFV, SDN and cloud architectures, licensing models will need to adapt to new deployment methods

One of the greatest advantages of network functions virtualization and cloud network architectures is the ability for network operators to dynamically scale the capacity of their networks to better mirror demand without having a significant amount of capacity laying dormant while waiting for busy-hour spikes in traffic. With NFV/cloud deployments, capacity changes are made based on need. All of the efficiency offered by elastic demand would disappear if the capacity was licensed in a traditional manner. Therefore, there needs to be licensing and revenue models that reflect this new reality.

For decades, networking and communications equipment consisted of physical “boxes” or nodes, oftentimes with physical interfaces or ports that denominated the capacity associated with the equipment. Capacity was purchased accordingly: Service providers would purchase the number of physical connections they needed based on actual number of customers and fairly reliable call models. With the advent of software-defined networking, NFV and cloud architectures, capacity is not limited to a specific network node or hardware component. 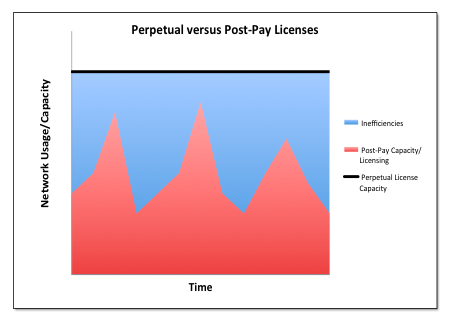 The chart above shows the inefficiencies NFV and post-pay licensing address. First, the capacity associated with traditional, perpetual licenses is static – represented by the black line in the chart. Second, measured by the red area, is network usage – voice, data or messaging – which goes up and down over a period of time. Network capacity is always somewhat greater than network traffic in order to accommodate unforeseen bursts in traffic or signaling. And third, the difference between the capacity associated with the static perpetual license capacity and the actual capacity used is the blue area in the chart or “inefficiencies.” That is the amount of extra or unused capacity as a result of perpetual licensing. While this inefficiency has always existed, with the advent of NFV or cloud network functions, which can scale up or down depending on network traffic, the capacity of the network can change near instantaneously and no longer has to be static, and licensing models must change to reflect this new reality. In this case, post-pay licensing models make the most sense by keeping network capacity and network utilization in sync, thereby eliminating the inefficiencies referenced above.

With license subscriptions, which includes software maintenance and updates, operators can capitalize multiyear arrangements and use a cap-and-grow approach to their existing base of licenses.

Post-pay or pay-as-you-go licensing is where fees are assessed based on session or license usage over a period of time.

This transition also involves operators that need to shift from a capital spending, budgeting, and depreciation financial planning and modeling to one that relies more on operating expenses. Operators’ core networks then are no longer wholly a fixed cost but one where there is a much greater degree of variability. While operators might lose some cost certainty as a result of post-pay licensing plans, there are safeguards that can be built into commercial agreements to control for any usage that might be deemed “out of the ordinary.” These changes also support operators’ gradual shift to developer operation as a network operational model. Since core network resources are seen less as a fixed cost and more as a variable cost, more business cases become practical due to lower fixed costs and a shorter payback period. This allows operators to be more experimental in their service offerings.

Vendors have the opportunity to both protect their installed base and to capture new market share by helping current and prospective customers with the transition from perpetual licenses to pay-as-you go over a period of time. Vendors have the opportunity to use new and innovative market models as a differentiator, especially if they can look at it from a long-term, multiyear view of the transition and revenue streams.